Among the best places to live in Maryland is Crofton, MD. Residents routinely head to work in Baltimore or Washington DC (each one just 24 miles away, north and south respectively), or Annapolis (a mere 14 miles from town). Unemployment is relatively low with work in Crofton focused on public administration, sciences, and technology. The most common jobs held by residents include sales, management, and computer-related employment. They commute about half an hour daily on average, but with the reward of coming home to an appealing location.

Once here, there are many great schools to send children to from pre-K to college. Three campuses of the University of Maryland are within 15 to 18 miles from Crofton (College Park, University College, and Baltimore City). The United States Naval Academy is also located within 15 miles.

Public schools are better funded in Crofton than in the country overall, so your children will receive an excellent start at one of five elementary schools, the middle school, or Crofton’s high school.
There are four shopping centers in town, as well as a well-used public transit system that links individuals all over the city and beyond, thereby resulting in better air quality and less traffic.

The Crofton Country Club offers a private facility with a beautiful gold course, tennis facilities and a swimming pool. It was founded here at the same time the original gated town was established in the 1960s.

John Hopkins was born at historic Whites Hall. George Washington once spent a night at Linthicum Walks, a 200+ year-old house which once stood on a tobacco farm. Although Crofton is a modern town, it boasts centuries-old associations.

Homes for Sale in Crofton, MD

The people of Crofton number over 27,000 and their numbers are growing rapidly. A few popular neighborhoods include:

Real estate for sale in Crofton, MD, is generally dated to no earlier than the 1960s and new homes are under construction. Crofton is a great place to raise a family and enjoy life, no matter what stage of it you happen to be in. To learn more about the neighborhoods and homes for sale in Crofton, contact Scott Smolen with RE/MAX Leading Edge today.

Move right in to this fabulous Crofton town house in Sycamore Mews! Updated and turn key 3 bedroom 2 full and 1 half bathroom home in the heart of Crofton. Amenities in...

Your elegant haven awaits in this stunning three-level brick townhome with an abundance of living space inside and out. From the moment you step inside, you are greeted b...

Be prepared to fall in love with this immaculate and spacious 4 bedroom 3.5 bath Colonial in sought after Chapman Farms. As you enter the home you will note the pristin...

This unique and remodeled split level offers an expanded floor plan that features a charming side addition with beamed ceilings, an electric fireplace, and partial golf c...

This stylish 3 Bedroom, 2 full/ 2 half bath home has been recently updated and offers 3 complete levels of living in sought after Crofton Commons! The home features gorg...

All offers will be presented 1/22 at 7 pm. Lovely 3 bedroom, 1 full bath, and 2 half baths located on a quiet street. Home has 2 bedrooms located on the second level an...

Beazer Homes Riverwalk at Crofton offers new townhomes and is the only new construction community with access to the new Crofton High School at Crofton, This low-maintena...

Located in the Walden neighborhood and built in 1996, this two story home offers approximately 3100 finished square feet, four bedrooms, two full and one half bath, lar... 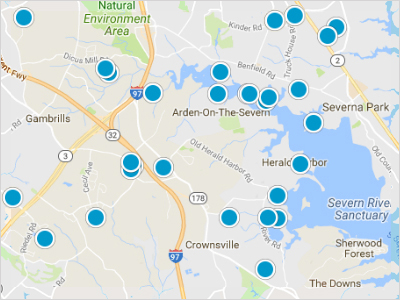